Hyper Light Drifter is a 2D Action RPG in the vein of the best 8-bit and 16-bit classics, with modernized mechanics and designs on a much grander scale.

Visions for this game have been fluttering in my skull for ages; something dark and fantastic, with giant forests to navigate, huge floating structures to explore, deep crumbling ruins to loot, massive throngs of enemies to rend, and behemoths both flesh and mechanical to overcome. I want it all to be as beautiful as possible, forging color with the dark and eerie wastes and intimidating landscapes. It plays like the best parts of A Link to the Past and Diablo, evolved: lightning fast combat, more mobility, an array of tactical options, more numerous and intelligent enemies, and a larger world with a twisted past to do it all in.
Klicken um auszuklappen... 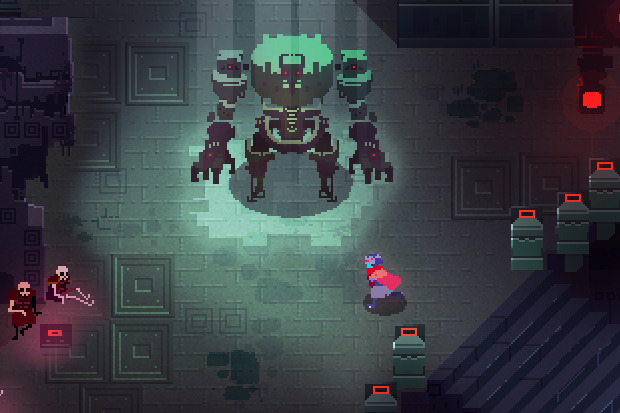 Primary weapon - Composed of phase shifted Hard Light (also known as Solid Light), your sword acts as the primary means of offense; it's quick, brutal, and can slash through most anything. Best of all it never runs low on energy.
Sprite Companion - An indispensable personalized drone, the Sprite manages your inventory virtually, maintains your shields, seeks out hidden paths and lights the way in the darkest of times. Functionality may be expanded with new modules.
Secondary items - You'll come across a variety of advanced weaponry, items and gear throughout your travels; Light Rail Pistols, Heavy Rifles, various hi-power explosives and enemy-aware Seeker Drones. All of these are powered by limited batteries, found scattered throughout the world.
Defense System - A rechargeable Hard Light Diamond shield which offers total protection from attacks for a short burst of time. If timed correctly projectiles can be reflected back at enemies for extra damage. Can be upgraded to extend duration.
Dash Module - Multi-use gear that enables a triple speed dash; can be used to evade attacks, cut across gaps and chasms, break through certain blocks and rubble and even stun enemies.
Klicken um auszuklappen...

Broken Shallows - A snowy coastal ancient war zone littered with beached mechs, fossilized munitions and the skeletons of wasted air craft, this beautiful, harsh shoreline zone offers a broken glimpse at one of the great battles past.

Emerald Brink - This vibrant landscape is home to massive vegetation that looms over all other occupying entities. With hostile plant life, deep cliffs that slide into toxic mists and savage giant invertebrates, this is a no-mans land ripe with lost treasures from the past
Klicken um auszuklappen...
Zuletzt editiert: 4. Oktober 2013

New Gear + Modules
- We're expanding the Drifter's arsenal and capabilities with a few new fancy additions like the Viper's Edge - an explosive that shoots razor hard-light shards upon it's second bounce - and an acid dash booster that leaves a damaging trail upon it's use. We'll be sprinkling details about new gear as development continues, so brace yourselves for some fun components.
Klicken um auszuklappen...

Hello Drifters. It's been a bit of time since our last update, and I wanted to keep everyone in the loop on happenings with development and the process we've been going through.

We had a good few weeks of team building behind the scenes, paperworking for trademarks/press/platforms/employment/permits and all that incredibly fun stuff (which takes far more time then anyone wants to think about), and intense discussions about mechanics and story and the world we've been building. I'll let Casey and Teddy fill you in on their progress below:

The interesting and slightly frustrating thing about my part in the process at this point is that most of what I've been doing I wont be sharing with any of you! 'Cause you know, spoiler alert! We aren't about to give away the rich narrative experience we're crafting before the game is even playable!!! 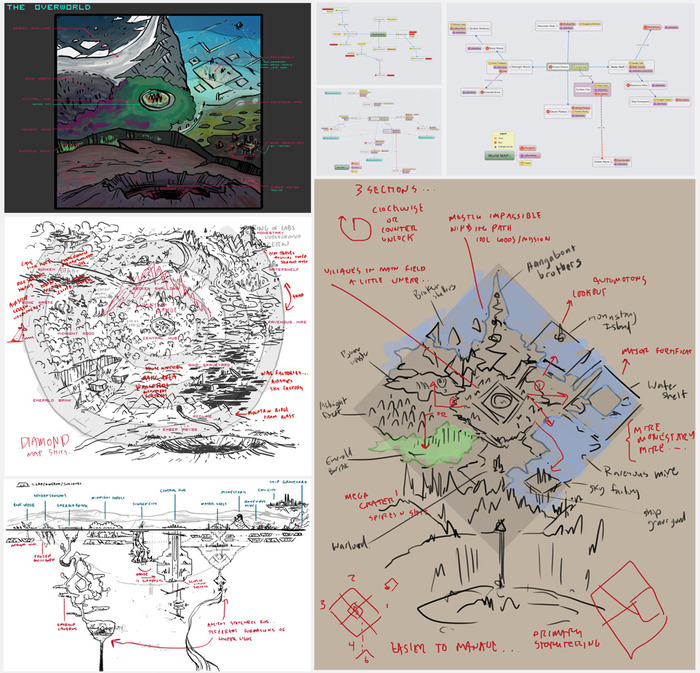 To wrap our heads around all of this, Alex and I have been ping ponging rough sketches back and forth, poking and prodding, acting as cartographers of a sort. Its also been super helpful to diagram it out, allowing us to quickly iterate different placings of the land masses, towns, and dungeons. We've used Xmind for this. It's got a few fussy annoying things. Anyone have any other favorite mind mapping programs?

Oh, and here's a page from my sketchbook. Some enemy doodles!
Klicken um auszuklappen... 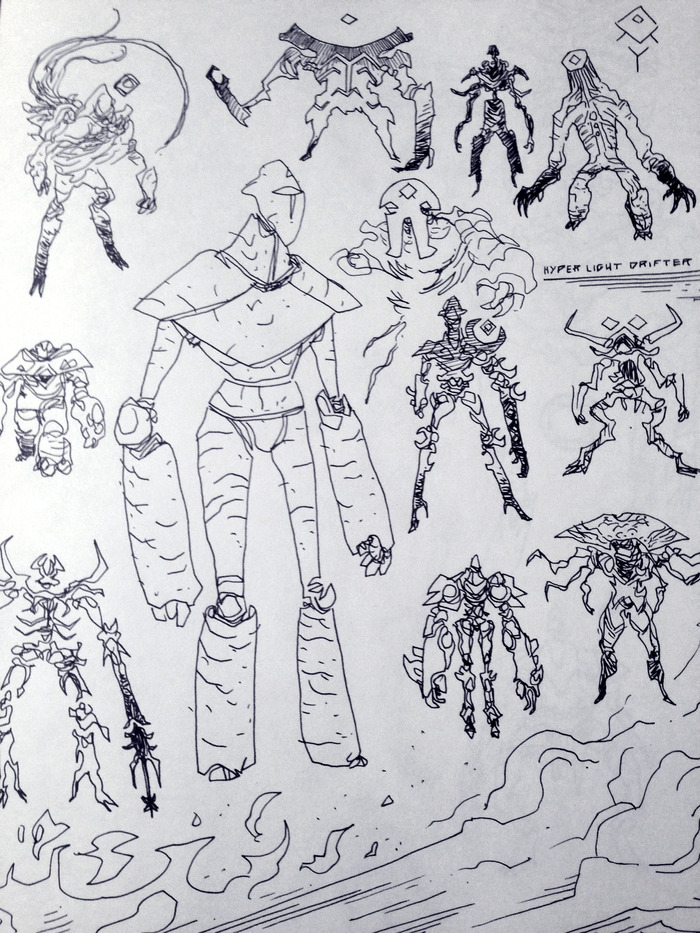 Here's a quick update: you may have noticed that we are doing a crossover with the wonderful looking PARADISE LOST: First Contact. Enol has made a fantastic update surrounding the Drifter.
Klicken um auszuklappen...

For HLD we plan to have Subject W appear in a deep secret lab full of other similar creatures that have the ability to posses automatons and possibly even the Drifter himself. It will be a dangerous and tentacle-laden venture.
Klicken um auszuklappen...

I just want to say that this game made my day. I played it at Pax East this afternoon and it was everything I wanted and more. The game is so gorgeous. You can tell how talented Alex Preston is and how much he cares about the way it looks. The gameplay is SO good. The game tough, but it's fair. Beau developed samurai gunn which is just a small sample of how precise this game is. He's made the controls just as spot on. Coop is dope. My friends and I were on the struggle bus trying to wrack up kills against the endless amount of enemies but it sure was fun. Finally, the moment I put on those headphones, a smile was plastered on my face. Disasterpiece's next masterpiece will be right here. It will just be a question of whether or not it's better than his first: FEZ.
Klicken um auszuklappen...
http://www.neogaf.com/forum/showpost.php?p=107940555&postcount=196

Drifters! It's been a whole year (!!) since we launched our campaign (wow, time bleeds quick these days), and it seems apt to celebrate with this playable Preview build! If you supported us at the $25 tier or above, get ready for the avalanche of meaty murder before you.

Preview (once called a Beta) Build

Beta isn't exactly the right term; some game features are locked, some have been hidden, others are being refined, and content is always being generated for the world. So, to help communicate a bit better we're calling it a Preview Build.

The important thing is that you get an early playable slice of the game starting on the 26th of September at 12:01 am (EST)! It will run until Midnight (PST) of the 28th. Beware vicious things living in the depths.

You'll receive a Steam Key in your email (the one used for your KS account) before the 26th.

While we have said previously that this build would be for Windows only, we've decided to push extra hard and try our best to get it on Mac as well. However, since it's early days on OSX for us we can't make a firm promise.

If you have bugs, crashes, and other issues send us a line at support@heart-machine.com. We will address issues the best we can as they come in. You can also use the KS comments and Steam forums for discussion.

If you haven't supported/pre-ordered at the Beta Access level, you can still get in on this limited Preview through the "Early Access Humble Widget" on heart-machine.com.

We're working with Steam to see if we can streamline the process, and give direct access throughout the preview weekend. We'll keep you updated.

Though we're working incredibly hard, we still have much to do. More levels, more enemies, more weapons; so many things! We're excited to put this early build into your hands so that we may learn directly from you, our supporters, what's working and what can be refined. As always, we'll keep you informed on how the game is developing as we continue crafting the full experience.
Klicken um auszuklappen...

Developer Alex Preston believes resolution does not matter for 2D games and he gives a pretty good reason to justify his statement. When asked whether his game will run at 1080p resolution, he had the following to say:

“I don’t think anybody actually cares about this with 2D games. It’s always more of a question of 3D games. I mean, resolution actually matters in that case. But in 2D games, it’s just the resolution you draw your sprite at. I don’t think that question has ever been a point of interest for anybody on 2D games, really.”

E3, PAX Prime and beyond

In awareness of our own physical and mental well-being as a team, we decided not to show at the E3 PC Gaming event this year. Instead, we chose to focus on finishing a major section of our game this month.

While E3 is an amazing event with great opportunities, it's also a stressful and difficult thing to balance during the development process, particularly with small teams like ours. It costs money and time to present at shows, and we are putting every ounce we have of both of those into the game itself.

When we're ready, we'll have ample opportunity to share our game at other upcoming events (PAX Prime being a major focus) and through other outlets (thanks to the kindness of Sony and Microsoft). In the meantime, we'll keep working as hard and smart as we possibly can.
Klicken um auszuklappen...
[ame]http://www.youtube.com/watch?v=qqZZ52tGtdY[/ame]
You must log in or register to reply here.
Teilen: Facebook Twitter Google+ Reddit Pinterest Tumblr WhatsApp E-Mail Link
Top